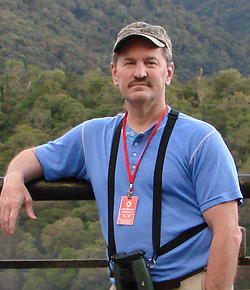 Martin has been studying natural history, population biology, and life histories of diverse species of birds in various parts of the world for 35 years; 35 years in Arizona, USA, 3 years in PN El Rey Argentina, 7 years in PN Yacambu in Venezuela, 7 years in South Africa, and 9 years in PN Kinabalu Malaysia.  He is a Senior Scientist and Professor with the USGS Montana Cooperative Wildlife Research Unit at the University of Montana.

Genital evolution in birds; losing the penis and winning the battle

Dr. Patricia Brennan is interested in the morphological evolution of genital morphology in vertebrates, and the mechanisms that drive genital diversification, sexual conflict in particular. She has a BSc in Marine Biology from her native Colombia, where she studied cardiac physiology of marine mammals. She went on to work in the Galapagos Islands aboard a research vessel (R/V Odyssey). Brennan completed her Ph.D. dissertation at Cornell University, where she studied the breeding biology and reproductive system of the Great Tinamou (Tinamus major). During this time she developed an interest on post-copulatory selection in birds, and went on to do her post-doctoral work on genital and sperm traits in ducks. Her current interests have expanded to understanding genital evolution in vertebrates, in particular examining female genital morphology and coevolution. She worked as a research professor at Umass Amherst before joining the faculty at Mount Holyoke College. Dr. Brennan’s work has recently been featured in the the XX files: Extraordinary Science, extraordinary women”, a series of short films about women in science produced by AAAS.

Brennan’s research has received much media attention and she has become very interested in public outreach and education, and is an advocate (in print and lectures) of the importance of science communication and defense of basic science.

Genomic drivers of evolutionary change:  micro- and macroevolutionary examples across the avian tree of life 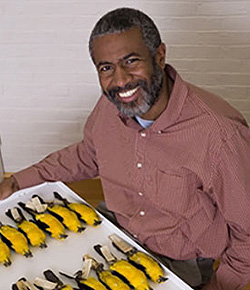 Scott Edwards is Alexander Agassiz Professor of Zoology and Curator of Ornithology in the Museum of Comparative Zoology at Harvard University. His research focuses on diverse aspects of avian biology, including evolutionary history and biogeography, disease ecology, population genetics and comparative genomics.  He did a postdoctoral work in immunogenetics at the University of Florida, using the major histocompatibility complex (MHC) to study interactions of birds and infectious diseases, such as the interaction of House Finches (Haemorhous mexicanus) and the bacterial pathogen Mycoplasma gallisepticum.  His work on the MHC led him to study the large-scale structure of the avian genome and informed his current interest in using comparative genomics to study the genetic basis of phenotypic innovation in birds.  His recent work uses comparative genomics in diverse contexts to study evolution and adaptation in birds, including ecological adaptations in the Neotropics and the origin of flightlessness.  Scott currently serves on the Council of the American Ornithological Society and has served as President of the Society for the Study of Evolution, the Society of Systematic Biologists, and the American Genetic Association, as well as on the Advisory Boards of the National Museum of Natural History (Smithsonian) and the Cornell Lab of Ornithology. He is an Elected Fellow of the American Ornithological Society (2006), the American Association of the Advancement of Science (2009), and the US National Academy of Sciences (2015). 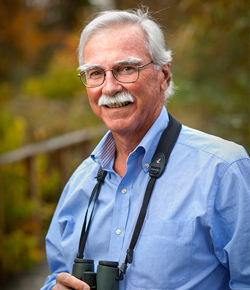 Fitzpatrick is Executive Director of the Cornell Laboratory of Ornithology and a professor in the Department of Ecology and Evolutionary Biology at Cornell University. Since receiving his Ph.D. from Princeton University in 1978, he served as Curator of Birds and Chairman of Zoology at the Field Museum in Chicago, and Director of the Archbold Biological Station in central Florida, before coming to Cornell in 1995. He has led numerous scientific expeditions in the Amazon Basin and Andean foothills, leading to discovery of a number of new bird species. His current research continues his 45-year collaborative studies of the ecology, behavior, landscape genetics, and conservation of the endangered Florida Scrub-Jay. At the Cornell Lab, he and his colleagues have pioneered the development of the Internet-based citizen-science project, eBird, as a revolutionary tool for continent-scale bird monitoring. His nearly 200 scientific publications include the book Neotropical Birds: Ecology and Conservation and the Tyrannidae section of the Handbook of Birds of the World, volume 9. He has served as President of the American Ornithologists’ Union, on governing boards of The Nature Conservancy and the National Audubon Society, and on three Endangered Species Recovery Teams.

Phylogeography of birds: revealing the biogeographical history of the Atlantic Forest 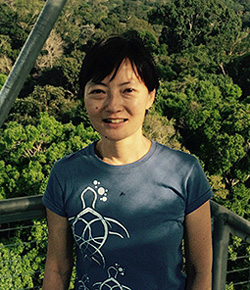 Cristina Yumi Miyaki is interested on historical biogeography and conservation of Neotropical Birds. Her lab has published a number of papers on the phylogeography of Atlantic Forest birds. This biome is one of the top five biodiversity hotspots in the world and less than 16% of its original vegetation remains today. These phylogeographic studies are revealing a complex biogeographical history, with some species presenting population structure while others do not. The processes behind this history are being investigated with the collaboration of a multidisciplinary team that includes, among specialists from various areas, geologists and remote sensing engineers. Her lab has also published molecular phylogenies of parrots, focusing on the reconstruction of the relationships within the Neotropical group, but also its relation with other groups of this Gondwanan order. As many species of parrots are considered endangered, some population and individual-level studies of these birds were also produced. Some studies allowed the molecular identification of species of apprehended embryos and of the most probable geographic origin of apprehended chicks. Other studies revealed the level of extra-pair paternity of some parrot species in the wild.

Sharing the air with wildlife: patterns, processes and conservation in 3D 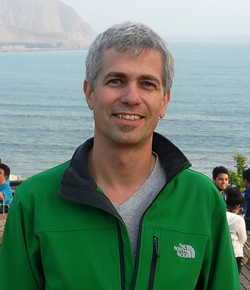 Dr. Sergio Lambertucci is a researcher at CONICET and lecturer of Ecology and Conservation Biology at the Universidad Nacional del Comahue in Argentina. He is the head of a Research Group on Conservation Biology of INIBIOMA (Instituto en Biodiversidad y Medio Ambiente) and investigates general aspects of ecology and conservation of species, particularly birds of prey. His interest is mainly on the environmental problems caused by the anthropogenic impact and the desire to promote, based on scientific evidence, measures that enable better coexistence between man and nature. Their studies range from the impact generated on the wildlife by the fragmentation of the habitat, the pollutants, the persecution, or the perception about the fauna. With his group he carries out, among other studies, trophic ecology, movement ecology, toxicology, genetics, isotopes and the identification of areas of conservation importance for wildlife. 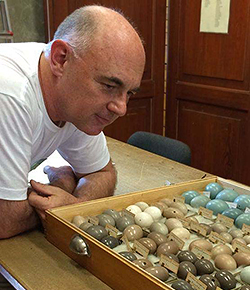 Miguel Ângelo Marini is a Full Professor at the Zoology Department at Universidade de Brasília (UnB), Brasília, located in the center of the Cerrado biome, a Neotropical savanna. He took his Ph.D. at the University of Illinois at Urbana-Champaign (UIUC, USA) and spent a sabbatical leave at Muséum National d’Histoire Naturelle (MNHN, France). Miguel was editor of the Revista Brasileira de Ornitologia (Ararajuba) and former president of the Brazilian Ornithological Society (SBO). His line of research includes reproductive biology and conservation of Neotropical birds. Currently he is studying the effects of climate change and biogeographical patterns on the breeding biology of birds. To achieve his goals he is building up a database of Neotropical birds’ reproduction based on field work following bird’s nests, on nesting records from museum egg collections and on literature records.